How To Choose The Best Yoghurt For Your Family’s Health 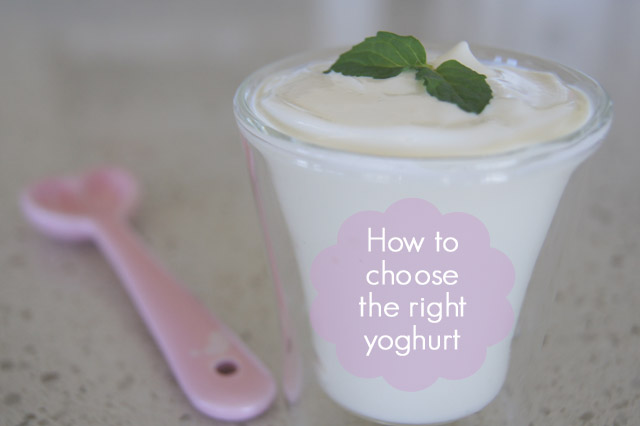 Have you ever wondered why so many health gurus tout how wonderful yoghurt is for you? Do you feel overwhelmed facing the yoghurt section in your supermarket? Just how do you know how to choose the best yoghurt for your health?

Yogurt is generally known as a “live” food, because it contains living micro-organisms that exist naturally in the human gut*. It’s high on protein, calcium, and vitamins. It’s an excellent choice when you are watching your weight as the protein aids in satiety, muscle recovery and helps maintain blood sugar levels. Yogurt is also great for building your immune system (thanks to probiotics), and ensuring calcium is included in  your diet.
The yoghurt section at the supermarket seems to grow each week. Too many choices can lead to being caught up in the marketing jargon or choosing the one with the most popular packaging. Unfortunately a tonne of these on the supermarket shelves fall into the ‘dairy dessert’ category…basically a glorified sweet dessert.  These are mainly made from cow’s milk, thickened and with added sugars, fruit and other ingredients, with little nutritional benefit.  It’s common for manufacturers to add bacteria to their products (which doesn’t last) – rather than make it from live cultures – to encourage consumers to purchase their product.
Real yoghurts not only contain probiotics but they are cultured from them in the beginning (rather than having them added at the end).
I’m always a little overwhelmed when choosing a yoghurt for the family but if you know what to look for, it can become child’s play and you won’t even blink an eye at the non conforming brands! I have found that quality is graded with one end of the yoghurt section harbouring the ‘dessert’ yoghurts while the opposite end stocks the ‘pot set’ and ‘greek’ varieties. The only way to know what you’re buying is learn to read the labels. Do not believe everything you read on the front of the label, do your own homework and get cluey on what makes up a good choice

How to choose the best yoghurt?

+ Choose a cultured yoghurt, you will be able to pick it up on most products. It may say ‘pot set’ or ‘fermented’, opt away from the brands with sugar shown in the top three ingredients.

+ Select the plain yoghurts first, these are generally less sweeter, and better for the kids. The more flavour or colour a yoghurt appears to have, the more sugar it is also likely to have. Again check the label here as you look to see if there is at least 5gm per 100gm or under of sugar.
+ More the friendly bacteria, the better.  Check the label for this one. The good guys include Bifidobacterium strains (B. animalis and B. lactis).  Lactobacillus strains (bulgaricus, lactobacillus acidophilus, L. animalis and L. casei) and Streptococcus Thermophilus are all names to look out for. Look for the phrase “contains live and active cultures”.
+ Generally full cream varieties are not bulked up with added sugars, so they are a better choice.  Be aware of added sugar in the form of sucrose, glucose, lactose, fructose, corn syrup, honey etc.
+ I tend to shy away from the kiddy and infant yoghurts and choose low sugar, full cream adult versions – they are far better for the kids and more cost effective
A summary of the different varieties by Choice

Made by straining out the liquid whey, leaving the yoghurt thick and creamy, the association with the Mediterranean diet tends to give Greek yoghurt a healthy image. And although some brands can have higher protein, Greek yoghurt can also have higher saturated fat (up to 7g compared with around 4g for plain yoghurt), which helps make it thick and creamy.The removal of the whey also means Greek yoghurt often has lower calcium levels. Some brands also add cream, but this is not a traditional ingredient. Yoghurts must conform to food standards pertaining to claims like “low fat”, however there are no regulations in Australia specifying that a particular style of yoghurt, such as Greek, has to be made in a certain way or contain particular ingredients.

Not strained and often containing thickeners such as cream, milk solids, gelatine and gums, which are added to create a creamy texture.

Milk and live cultures are added straight to the pot, which, makers claim, means thickeners such as gelatine need not be added.

Yoghurt without flavouring or added sugar.

Made by adding an enzyme during processing that breaks down the lactose into simple sugars, so it’s safe for those who are intolerant to lactose.

Has the same ingredients as thick yoghurt but is thinner and designed to be poured over cereal or drunk by itself.

An ethical-ecological approach to agriculture that focuses on the relationship of soil, plants and animals. Like organic, it emphasises sustainability and does not involve chemicals in production. Yoghurt is a great choice for your health—served on your breakfast, in a smoothie, as a dressing or to make a yummy dip like tzatziki. One of my favourite yoghurt recipes is my sticky cacao chia seed pudding.
Three of my favourite’s are
Farmer’s Union Natural Pot Set (per 100g serve): 306kJ, 4.6g protein, 3.2g fat (2.1g saturated fat), 6.5g sugars, 166mg calcium.

All in all, we now know what we’ll be adding to the grocery list this week!
What brand of yoghurt do you buy? Do you have any favourite recipes with yoghurt in them? 4 Ways to Improve Your Weekly Meal Planning (or start it) The Foods That Are “Super” in Our Household